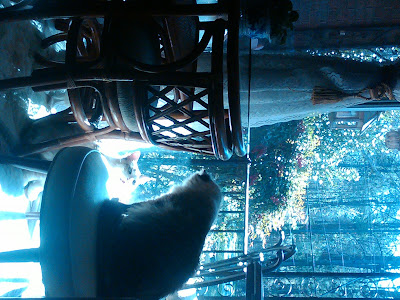 What a beautiful morning! Here in Alabama it's sunny and cool outside, -high 50's. The rain pounded us for 2 days along with whaling winds, and tornadoes. The evidence of it is a flooded front yard, lawn furniture blown around, busted outside ceramic pots and lots of tree limbs on the ground. 7 tornadoes touched down but this morning we awoke to beautiful sunshine and a renewed feeling that I've been blessed and  "Life is good."

My family pets were delighted to see the morning sun as well. They huddled around the sun rays and gave each other loving fur hugs in celebration of the beautiful morning.

David Thomas "Davy" Jones (30 December 1945 – 29 February 2012) was an English singer-songwriter and actor best known as a member of The Monkees.

Death
The Martin County Sheriff's Office stated that Jones had complained of breathing difficulties on the morning of 29 February 2012, in Indiantown, Florida, and had been transported to Martin Memorial South Hospital in Stuart, where he was pronounced dead. Jones is survived by his widow, Jessica, and four daughters.

Member of the Monkees / Wikipedia
From 1965 to 1971, Jones was a member of The Monkees, a pop-rock group formed expressly for a television show of the same name. With Screen Gems producing the series, Jones was shortlisted for auditions, as he was the only Monkee who was signed to a deal with the studio, but still had to meet producers Bob Rafelson's and Bert Schneider's standards. Jones sang lead vocals on many of the Monkees' recordings, including "I Wanna Be Free" and "Daydream Believer". Jones met Laramy Smith in 1967, introduced by Eirik Wangberg (then a producer and co-owner of Sound Records), and they co-produced The Children, an Austin, Texas group Jones discovered while on tour with the Monkees. A single was released on Laramie Records entitled "Picture Me", which reached Billboard at number 2 with a bullet.
After the television series went off the air, The Monkees disbanded. However, Jones continued to perform solo, while later joining with fellow Monkee Micky Dolenz and songwriters Tommy Boyce and Bobby Hart as a short-lived group called Dolenz, Jones, Boyce & Hart. He also toured throughout the years with other members as various incarnations of the Monkees.
In February 2011, Jones mentioned rumours of another Monkees reunion. "There's even talk of putting the Monkees back together again in the next year or so for a U.S. and UK tour," he told Disney's Backstage Pass newsletter. "You're always hearing all those great songs on the radio, in commercials, movies, almost everywhere." The tour came to fruition entitled, "An Evening with The Monkees: The 45th Anniversary Tour."

Early Life
Davy Jones was born at 20 Leamington Street, Openshaw, Manchester, Lancashire, England, on 30 December 1945. At the age of 11, he began his acting career and appeared on the British television soap opera Coronation Street, which was produced at Granada Studios by Granada Television in Manchester. In 1961 Jones played Ena Sharples' grandson, Colin Lomax, the year Coronation Streetwas first broadcast. He also appeared in the BBC police series Z-Cars. However, after the death of his mother from emphysema when he was 14 years old, he left acting and trained as a jockey with Basil Foster.


Legacy
When commenting on Jones' death, Time magazine contributor James Poniewozik praised the classic sitcom, and Jones in particular, saying "even if the show never meant to be more than entertainment and a hit-single generator, we shouldn’t sell The Monkees short. It was far better television than it had to be; during an era of formulaic domestic sitcoms and wacky comedies, it was a stylistically ambitious show, with a distinctive visual style, absurdist sense of humor and unusual story structure. Whatever Jones and The Monkees were meant to be, they became creative artists in their own right, and Jones' chipper Brit-pop presence was a big reason they were able to produce work that was commercial, wholesome and yet impressively weird."


Horse racing
Jones was a keen horse owner and rider. Training as a jockey in his teens, Jones later said "I made one huge mistake. When The Monkees finished in 1969–70, I should have got away from Hollywood and got back into the racing game. Instead I waited another 10 years. Everyone makes mistakes in life and for me that was the biggest." He held an amateur rider's licence and rode in his first race at Newbury for trainer Toby Balding. On 1 February 1996 he won his first race, on Digpast, in the one-mile Ontario Amateur Riders' Handicap at Lingfield. Jones also horse ownership interests in both the USA and the United Kingdom and was the representative for a racecourse in Virginia.

Jones was married three times, to:
He also had four daughters from his first two marriages:
Rest In Peace