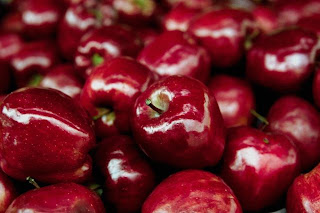 "National Apple Month is a restricted-fund (financially self-supporting) program of the U.S. Apple Association. Originally founded in 1904 as National Apple Week, it was expanded in 1996 to a three-month promotional window from September through November."
Source: www.usapple.org
A survey by the American Pie Council and Crisco found that apple pie is the favorite flavor among one out of four Americans, followed by pumpkin, chocolate, lemon meringue, and cherry.

The term "as American as apple pie" traces back to 14th century England. The Pilgrims brought their pie-making skills, along with the apple seeds to America. As the popularity of apple pie spread throughout the nation, the phrase grew to symbolize American prosperity. Source: crisco.com

Another date to remember is December 1st. This is eat a pie day and eat a red apple day.

For more on apples visit http://www.gone-ta-pott.com/National_apple_month.html
Posted by Gone-ta-pott at 12:30 PM 1 comments Cheesy Nachos Originally uploaded by pamelasvoboda
Extra Cheesy Nachos! You can find my picture on flickr.com. A great photo sharing site. November 6 each and every year is National Nachos Day. Just about everybody loves nachos so in honor of National Nacho Day make your family a fun snack and enjoy this meaty and cheesy treat. See my how-to video. www.youtube.com/watch?v=DfQihm1Rga4
Posted by Gone-ta-pott at 8:32 AM 1 comments

Hey.... put this recipe on your Halloween list too! At Halloween you know how everybody is looking for food that has great visual appeal and this is one treat that just perfect for all the fall Holiday's.

November is National Peanut Butter Lovers Month and humans are not the only ones who love peanut butter! This great photo is by Lampy from flickr.com and has to be one of my favorite squirrel photos. I love squirrels myself and I also enjoy feeding them corn and peanut butter. They absolutelyyyy love it!

Kids craft idea
You can buy dried corn-on-the-cob in the pet section of wal-mart, it is usually located near the bird seed. Or you can buy it at your local lumber store like Home Depot in the Garden Center area. Try spreading the dry corn-on-the-cob with peanut butter then roll it in bird seed and sunflower seeds. Drill a hole through the top of the cob..... tread some wire or string through it so you can hang it from a tree limb. This is so much fun for the kids to do and it's so much fun to watch the squirrels and birds eat it all week long too! It's a great learning experience for everybody.
Posted by Gone-ta-pott at 12:44 PM 1 comments

krispy kreme doughnuts Originally uploaded by Jana Mills
Krispy Kreme Doughnuts! This great picture is by Jana Mills / on flickr.com November 5th is National Doughnut Day each and every year! What a great sweet treat. A doughnut, or donut, is a sweet, deep-fried piece of dough or batter. The two most common types are the torus-shaped ring doughnut and the filled doughnut, a flattened sphere injected with jam/jelly, cream, custard, or another sweet filling. A small spherical piece of dough, originally made from the middle of a ring doughnut, may be cooked as a doughnut hole. Possible origins Doughnuts have a disputed history. One theory suggests that they were introduced into North America by Dutch settlers, who were responsible for popularizing other American desserts, including cookies, cream pie, and cobbler. This theory is bolstered by the fact that in the mid-19th Century doughnuts were called by the Dutch name "olykoeks," literally translated, "oily cakes." However, there is also archaeological evidence that the pastries were prepared by prehistoric Native Americans in southwestern USA.... Hanson Crockett Gregory, an American, claimed to have invented the ring-shaped doughnut in 1847 aboard a lime-trading ship when he was only sixteen years old.... Find more information about doughnuts on http://en.wikipedia.org/wiki/Doughnuts Well guys..... theres a krispy kreme doughnut shop just right down the road from me so I think I'm going to make my way there this morning and have doughnuts and coffee for breakfast! Ohhh yeah!
Posted by Gone-ta-pott at 8:51 AM 1 comments Caramels (Recipe)
Originally uploaded by Ruthieki
The great homemade candy photo is by Ruthieki from flickr.com. See the Caramels Recipe for this photo.

November 4 is the official day for National Candy Day. You would think that we had enough of candy since we just finished with Halloween but I thought we could talk about real homemade candy today instead of store bought candy which is what Halloween is mostly about.

If you click on the photo it will take you to the recipe to make lovely homemade Caramels. I enjoy making these myself during Thanksgiving and Christmas both. I just love to see a huge bowl of caramels where the rappers have been hand twisted. It looks fantastic and guys...... this homemade treat is a real memory for kids I assure you. You might want to make it a tradition in your family too.

Do you have a handmade candy recipe? Share it with us guys. I'm ready for a new one to add to my recipe collection.

For more candy fun visit:
http://www.gone-ta-pott.com/candy.html
Posted by Gone-ta-pott at 9:29 AM 1 comments Reuben Sandwich Originally uploaded by Cinara's Place
Happy Sandwich Day! Reuben Sandwich. November 3rd each and every year is National Sandwich Day. This is one Holiday that I think we will all agree is a great Holiday. There are absolutely thousands of sandwich recipes from around the world so friends I don't think we could ever run out of them. The one I have pictured here is the ever so popular "Reuben Sandwich." This great photo is by Cinara's Place from flickr. The Reuben sandwich is a grilled or toasted sandwich made with either corned beef or pastrami, sauerkraut, Swiss cheese, and either Russian dressing or Thousand Island dressing. It is typically made with rye bread, though originally it may have been served on pumpernickel bread. The origins of the Reuben are disputed. One account says that Reuben Kulakofsky (sometimes spelled Reubin), a grocer from Omaha, Nebraska, was the inventor, perhaps as part of a group effort by members of Kulakofsky's weekly poker game held in the Blackstone Hotel from around 1920 through 1935. The participants, who nicknamed themselves "the committee," included the hotel's owner, Charles Schimmel. The sandwich first gained local fame when Schimmel put it on the Blackstone's lunch menu...... Descendants of Arnold Reuben, owner of the now defunct Reuben Restaurant on 58th Street in New York City, also claim the invention. They maintain that Reuben created the sandwich in 1914..... From Wikipedia, the free encyclopedia. Do you know what the #1 Sandwich is in the United States? It's the Grill Cheese Sandwich! Kids just love them!
Posted by Gone-ta-pott at 1:22 PM 1 comments Eggs stuffed w/ Goat Cheese Originally uploaded by jbaugher
Here we go everybody. Today is National Deviled Egg Day and I found this great looking picture uploaded by jbaugher from flickr . The picture is deviled eggs stuffed with goat cheese. The recipe came from our favorite TV host from the food network- Mrs. Paula Deen. What else can we say about this Holiday except deviled eggs have got to be the most popular horsd'oeuvre there is. (hey how do you spell horsdoeurve any way?) We found through our research that deviled eggs are also known as stuffed eggs too. We also found out that many of the recipes you find for deviled eggs are just egg salad recipes too. So if your searching out recipes for deviled eggs and find out that you can't find very many..... then just look for Egg Salad Recipes. And just so you know..... there even a National Egg Salad Week too. When I was a kid we always had deviled eggs all throughout the year. We ate them with our meals many times and especially at our Sunday Dinners. I was raised on the basic recipe and I love them as much today as I did growing up. I love that paprika sprinkled on top. Do you have a Deviled Egg Recipe? Tell us about your favorite. Read more on National Deviled Egg Day with basic recipes.
Posted by Gone-ta-pott at 9:50 AM 5 comments My Cat Smokey Originally uploaded by pamelasvoboda
Hello hello hello! I trust everyone had a spooktactular Halloween. I know I sure did. It's now November 1st and I wanted to let everyone know that the first week in November is always National Cat Week. The picture you see here is a pic of my very own cat Smokey Dumpster. He's a beauty and quite the show off. He loves to roll around showing his fangs all the time. LOL! Visit Here for more pictures of him. You can even see picture of our other cats too. We have 7 of them! Please love your cats and do something special for them in honor of National Cat Week. Buy your cat a new cat toy or give him a special treat this week. Maybe your cat would like a new cat bed to sleep in or a new cat blanket. They love those. Or maybe.... you could go down to the animal shelter (petfinder.com) and save a cats life today. Think about cats and celebrate National Cat Week. They will love you for it.
Posted by Gone-ta-pott at 10:55 AM 1 comments