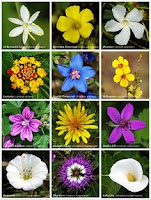 It's March 21 and that means it's National Flower Day. Yesterday was the first day of spring and it is only fitting that today be Flower Day right! I think every body loves flowers. I get a lot of pleasure out of planting flowers in my yard and watching them grow. Stephen, well..... he doesn't like the yard to much. hahaha - I love flowers on my kitchen table too!

I was doing some reading up on flowers this morning and found out that most countries have a National Flower. For example:

Country: United Kingdom (Whales)
Leek (BAbbingtons leek), Daffodil (Narcissus Amaryllidaceae)
The Leek and the Daffodil are both emblems of Wales. The national flower of Wales is usually considered to be the Daffodil. However, the Leek has even older associations as a traditional symbol of Wales - possibly because it's color, white over green, echo the ancient Welsh flag.

To read more on the National Flower of each country visit http://www.gone-ta-pott.com/national_flowers.html
I have a long list - and just so you know, the countries that are not listed either didn't adopt a flower to represent themselves with or I couldn't find any information at all. Some countries have National Trees as well. Have fun reading.

Now let's get Educated- What exactly is a flower??
Wikipedia tells us this......

A flower, also known as a bloom or blossom, is the reproductive structure found in flowering plants (plants of the division Magnoliophyta, also called angiosperms). The biological function of a flower is to mediate the union of male sperm with female ovum in order to produce seeds. The process begins with pollination, is followed by fertilization, leading to the formation and dispersal of the seeds. For the higher plants, seeds are the next generation, and serve as the primary means by which individuals of a species are dispersed across the landscape. The grouping of flowers on a plant are called the inflorescence.

In addition to serving as the reproductive organs of flowering plants, flowers have long been admired and used by humans, mainly to beautify their environment but also as a source of food.

While we're talking about flowers, today is also "National Fragrance Day." This day is about cologne, perfume and all the things that are good-smelling. That even includes potpourri, soaps, lotions and even scented candles. Fragrances are made from flowers most of the time. What a coincidence. For those of you who are crazy about perfume, here's a link for you. Fragrance Products for men and women.


A Joke for you!
A very dirty little fellow came in from playing in the
yard and asked his mother, "Who am I?"
Ready to play the game she said, "I don't know! Who are you?"
"WOW!" cried the child. "Mrs. Johnson was right! She said I
was so dirty, my own mother wouldn't recognize me!"

Something To Ponder
Isn't the best way to save face to keep the lower part shut?

Bible Verse for you
Deuteronomy 8:3 And he humbled thee, and suffered thee to hunger, and fed thee with manna, which thou knewest not, neither did thy fathers know; that he might make thee know that man doth not live by bread only, but by every word that proceedeth out of the mouth of the LORD doth man live.

Live life, love life, laugh with life and be happy!
Tell us what you think about today. Until Next time, Pam :)

Email ThisBlogThis!Share to TwitterShare to FacebookShare to Pinterest
Labels: flower

I look forward to your blog posts every day. Thank you for such a fun one. I'm a flower lover too. I went to HomeDepo and looked at all the flowers. I made my list of what I wanted and will be going back to pick them up. My husbands going to be digging holes all day. Annie in Florida

I'm a landscaper so National Flower Day is good for me. Keep on blogging. Larry is PCB

I really love what you do, congratulations !!! Thank you very much for sharing with us this article.