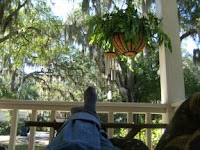 Email ThisBlogThis!Share to TwitterShare to FacebookShare to Pinterest
Labels: March

Where was that picture taken? It looks tropical. I wish that was my feet propped up.