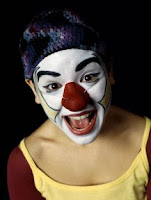 I really love to laugh and I really wish I laughed as much as an adult as I did as a child. When we get older life gets so serious and we sometimes forget how good it feels to let go, laugh and feel happy. We spend most of our days running and rushing and trying to meet deadlines and some how we leave out a very important part of life. "Laughter"

Let today, "National Laugh Day," be a reminder to all of us to not take life so serious and make someone laugh today. You know how laughter is catching, do it so everyone laughs....... including you.

Did you know the study of humor and laughter, and its psychological and physiological effects on the human body is called gelotology.

It has been shown that laughing helps to protect the heart. Although studies are inconclusive as to why, they do explain that mental stress impairs the endothelium, the protective barrier lining a person’s blood vessels. Psychologist Steve Sultanoff, Ph.D., the president of the American Association for Therapeutic Humor, gave this explanation:

"With deep, heartfelt laughter, it appears that serum cortisol, which is a hormone that is secreted when we’re under stress, is decreased. So when you’re having a stress reaction, if you laugh, apparently the cortisol that has been released during the stress reaction is decreased."

Bible Humor
During his sermon one Sunday, the local preacher told his congregation
the entire range of human experience could be found in the Holy Bible.

He confidently stated, "If anything can happen to humans, it is
described somewhere in the Holy Bible."

After the service, a woman came up to the preacher and said, "Reverend,
I don't think the Holy Bible mentions anything about PMS."

The preacher told the woman he was certain he could find a reference to
PMS somewhere in scripture.

During the following week, he searched diligently, book-by-book,
chapter-by-chapter and verse-by-verse.

On the following Sunday, the woman came up to him and asked, "Did you
find any references to PMS in the Bible?"

The preacher smiled, opened his Bible and began to read, "...and Mary
rode Joseph's a*s all the way to Bethlehem."

Dearest Wife,
Just got checked in. Everything prepared for your arrival tomorrow.
Your Loving Husband
P.S. Sure is hot down here.

Are there any other humor related Holidays?
Yes! National Humor Month is the month of April.
August 16th is "Tell a joke day."
Each year, "World Laughter Day" is celebrated the first Sunday in May.
National Laugh Day: March 19
Posted by Gone-ta-pott at 8:25 AM

I'm 70 years old and I still laugh but not as hearty. I do have found memories as a child of laughing and laughing with my little friends. All those friends are dead now but my memories still make me smile. If it were not for laughing as a child I wouldn't smile now. We need to make sure our children have the opportunity to laugh as much as possible. Mrs.Audry

Laughter heals ALL. I make it a point to laugh every day. June