Celebration Food: There is a custom of eating foods fried or baked in oil (preferably olive oil) to commemorate the miracle of a small flask of oil keeping the flame in the Temple alight for eight days. Traditional foods include potato pancakes, known as latkes in Yiddish, especially among Ashkenazi families. Sephardi, Polish and Israeli families eat jam-filled doughnuts (Yiddish: פאנטשקעס pontshkes), bimuelos (fritters) and sufganiyot which are deep-fried in oil. Bakeries in Israel have popularized many new types of fillings for sufganiyot besides the traditional strawberry jelly filling, including chocolate cream, vanilla cream, caramel, cappucino and others. In recent years, downsized, "mini" sufganiyot containing half the calories of the regular, 400-to-600-calorie version have become popular. There is also a tradition of eating cheese products on Hanukkah recorded in rabbinic literature. This custom is seen as a commemoration of the involvement of Judith and women in the events of  Hanukkah .


A sufganiyah is a ball-shaped doughnut that is first deep-fried, then pierced and injected with jelly or custard, and then topped with powdered sugar. It is similar to the German Berliner, the Polish pączki, or the Russian ponchik. In Yiddish, sufganiyot are known as ponchkes. They are usually eaten warm.

Sufganiyot are widely consumed in Israel in the weeks leading up to and including the Hanukkah holiday.At Hanukkah, Jews observe the custom of eating fried foods in commemoration of the miracle associated with the Temple oil. While potato pancakes (latkes or levivot) are also eaten in Israel, sufganiyot are considered a more "Israeli" Hanukkah treat. dyingforchocolate.blog has a recipe.


Latkes are potato pancakes, commonly associated with the Jewish cultural tradition in the United States and Europe. They can be and are served any time, but traditionally form part of the menu during the celebration of Chanukah. Eating potato pancakes is not one of the mitzvot of Chanukah; that is, it is not a fundamental part of the Chanukah rituals, and has no religious significance. It is seen as appropriate to eat foods cooked in oil during a festival that celebrates the miracle of the Chanukah oil. In Israel, potato pancakes are familiar and well-liked but the sufganiya (jelly doughnut) is considered to be more Israeli.

Various recipes for potato pancakes vary in the degree of fineness to which the potatoes are grated. Some are grated to long strips, others to a fine powder. Both latkes and potato pancakes bear a distant resemblance to the American dish, hash browns; however, hash browns are merely coarsely grated potatoes with no binding ingredients or flour. 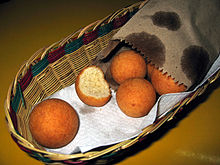 A Buñuelo alternatively called bimuelo, birmuelo, bermuelo, burmuelo, bonuelo; Catalan: bunyol, IPA: [buˈɲɔɫ]) is a fried dough ball. It is a popular snack in Argentina, Colombia, Cuba, Mexico, Spain, Peru, the Philippines, Turkey, Greece, Morocco, and is a tradition at Christmas, Ramadan and among Sephardic Jews at Hanukkah. It will usually have a filling or a topping. It is also an "essential" dish in Mexican cuisine.
bunuelos recipe

Hanukkah gelt (Yiddish: חנוכה געלט, hanukkah gelt, literally "Hanukkah money", Hebrew: דמי חנוכה‎, dmei chanukah, literally "Hanukkah money") refers to money as well as chocolate coins given to Jewish children on the festival of Hanukkah. The word gelt means money in Yiddish. In addition to being given on Hanukkah, chocolate coins are a popular Christmas present as well.
Posted by Gone-ta-pott at 11:18 AM

Thanks for sharing these delectables, Pam. I saw a recipe for the sufganiyah over at Janet's Dying for Chocolate that look heavenly. Hopefully someday I will get to sample them!

Thanks for sharing, Pam...Just in case I don't make it back, A Very Happy Holiday to you and Yours. (my eye is on the mend ever s slowly...:)

A Very Merry Christmas to you and Marion Louise. :) I will be happy to see you back at the New Year.

I made bunuelos and they turned out great.

This is one of the highly informatics and attractive blogs that has not only educated also informed me in a very effective manner. There are very few blog like this one I have read.